Bennett, Corey and Fowler Form The Austin Baseball Association in 1986 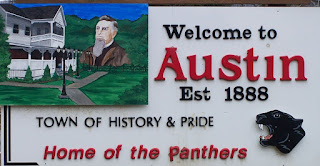 In the spring of 1986 I became the manager of the Austin Little League Baseball program. The equipment was unsafe to use. The helmets were cracked and the stitching on the baseballs were loose and coming undone. The baseball field needed a lot of work to get it in a playable condition.

I immediately went on a "door knocking campaign" to raise money to buy new equipment and supplies. I was met with overwhelming support by the community. See newspaper article below.

With the help  and support of Paul Bennett and Ed Corey, we were able to get the baseball diamond in satisfactory playing condition.

At this time, the three of us decided to form the Austin Baseball Association.

Note: Paul Bennett and Ed Corey would team up with me again approximately 20 years later to remove the brush from the east side of the school path to the Freeman Run creek which was a monumental task.

Once the baseball season ended in 1986 a major overhaul of the baseball playing field was performed by Ed, Paul, myself, and Paul's brother Richard who owned and operated a construction company. See newspaper article below.

Since 1986, there have been many dedicated individuals who have devoted countless hours in improving upon what Ed, Paul and I started in 1986.

*Article was previously published in The Austin Boro News Blog.
Posted by Bernard "Mike" Fowler at 5:43 AM