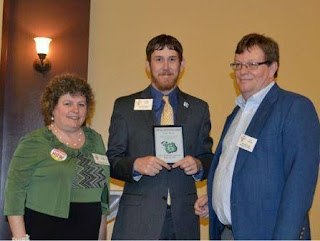 David in the middle being presented with the U.S. Route 6 Lifetime Achievement Award in 2015.  Terri Dennison, Executive Director of PA Route 6 Alliance on left and Kevin Abrams, Executive Director, Northern Tier Regional Planning and Development Commission on the right.

David grew up here in Austin, Pennsylvania, and attended the Austin Area School District, the smallest public school in the Commonwealth of Pennsylvania. Our kids attended AASD during the same time-frame as David and if you know Austin, it's like the community is one large family; and, our family is very proud of him!

Upon graduating from AASD in 1997, David attended and graduated from Penn State University.

At the age of 23, he began his quest to make Potter County Pennsylvania known far and wide and in doing so won many awards. Please refer to the July 1, 2016, issue of The Bradford Era which chronicles his many achievements.

But, what I will remember most about David Brooks is that he never forgot his hometown of Austin, Pennsylvania.

We will most certainly miss David here in Potter County.

David. May you enjoy good health, happiness and  prosperity in all your future endeavors.